The BAER post-fire assessment team uses the soil burn severity data to identify if there are areas of concern where increased soil erosion, accelerated surface water run-off, and debris flows have potential to impact human life or safety, property, and critical natural and cultural resources. The BAER team consists of Forest Service scientists and specialists that are considering options for emergency stabilization treatments for those critical resources at risk.

In specific areas that experienced moderate to high soil burn severity, there could be concern for run-off from steep hillslopes and resulting increases in post-fire erosion and debris flows.

The United States Geologic Survey will use the BAER data to assess the potential post-fire impacts to watersheds and to predict debris flow response during damaging storm events.

The next step in the BAER assessment will be to determine which resources are at greatest risk from damaging flood events generated by storms on the burned areas. The term “values at risk” refers to human life and safety, property, natural resources or cultural resources at risk of damage or loss.

The Coal Hollow Fire soil burn severity map can be downloaded at the “Coal Hollow BAER” InciWeb site (https://inciweb.nwcg.gov/incident/6184/) as a JPEG version under the “maps” tab.

The BAER team began its assessment of the Coal Hollow Fire, Aug. 29 evaluating post-fire watershed conditions and identifying values at risk that exist after the fire.  After a wildfire, steep slopes, loss of canopy and ground cover in addition to the formation of fire induced water repellent soils can lead to increased erosion, flooding and debris flows.

The BAER team, which is made up of hydrologists, soil scientists, wildlife biologists, botanists, archeologists, range conservationists, engineers, GIS specialists have evaluated the burned area from the air and ground during their assessment. The reconnaissance flight helped them see the extent of the burned area and which drainages might be more susceptible to post-fire flooding and debris flows.

The team does a rapid assessment of the burned area and evaluates the threats posed by the burn and, if warranted, recommends treatments they believe will be effective in reducing risks to human life, safety, property and critical natural or cultural resources.

The BAER program is a Forest Service program that is only allowed to do work on Forest System Lands. It does work with state and local cooperators who can assist affected landowners to prepare for rain events. The Natural Resources Conservation Service (NRCS) has an Emergency Watershed Protection Program available to assist landowners in preparing for potential flooding.

It is important that landowners work directly with NRCS and other agencies to determine appropriate actions needed to protect structures and other assets.

The team’s work must be completed quickly. It has only days to make a rapid assessment of the burned area to evaluate the burned watersheds and determine the potential for increased post-fire flooding, sediment flows, increased erosion, and rock slides that may pose an unacceptable risk to life, property and  critical natural resources.

They then determine if there are appropriate and effective emergency stabilization measures that can be implemented on federal lands in a timely manner to reduce unacceptable risks resulting from post-fire conditions. 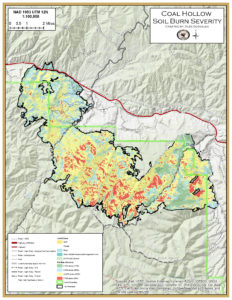