NOTE:  Utah bowhunting season opens today and hunters planning to enter the National Forests are urged to check U. S. Forest Service closure maps.  Areas near the fire have been closed for the safety of both firefighters and the public.

Current Situation:  As predicted, fire activity increased yesterday, especially in Division X where the fire spotted near the containment line but was held in check by aircraft.  Air resources have greatly assisted firefighters, especially in areas of extremely rough terrain around the Coal Hollow fire.  Large plumes of smoke were visible yesterday in Divisions Q and R as firefighters conducted successful burning operations during the afternoon.  A changing weather pattern over the weekend will bring strong, steady winds from the NW on Saturday which could test containment lines, especially in the southern portions of the fire and where slope and fuels align to carry fire pushed by the winds.

In Division M, south of Hwy 6, personnel continued to patrol and mop up along the fire’s edge to secure the northern perimeter. Planned firing operations for yesterday were not conducted but will be initiated when conditions allow. In Division Q on the eastern portion of the fire, a large burnout operation was conducted to remove fuels between indirect containment lines and the fire’s edge. This will decrease the chances of uncontrolled fire reaching Hwy 6.

In Division R, firefighters conducted burnout operations in areas between established dozer lines and the fire’s edge from near Bennion Creek Road in the southeast corner of the fire to the west.   A large smoke column was visible in the late afternoon as these firing operations progressed.    Due to inaccessible terrain, fire crews in Division T are engaging in areas where they can be successful and focusing on monitoring the slow approach toward Skyline and Garrett’s Ridge roads.  Direct engagement in this area has a low probability of success and a high degree of risk.

In the southwest area of the fire, firefighters in Divisions X and Z continued construction of dozer and handlines. Additional crews will be inserted today to assist in line construction. Fireline preparation of the Lake Fork Road is nearly complete.   In the northwest, islands of unburned fuel in Division J burned yesterday afternoon and put up considerable smoke which was visible from Highway 6.  Today firefighters will continue securing the fire’s edge and improve handlines to further strengthen containment lines.

Weather:  Winds will be gusty today behind the cold front that passed overnight. Northwest winds will channel through the valleys and canyons that align northwest to southeast at 18-22 mph and produce gusts up to 30 mph. Winds will calm down on Sunday but will become strong again on Monday. Temperatures will be slightly cooler today with highs in the upper 70s to mid 80s, and relative humidity will be slightly higher, from the upper teens to the mid twenties.   Sunday will be slightly warmer and drier. 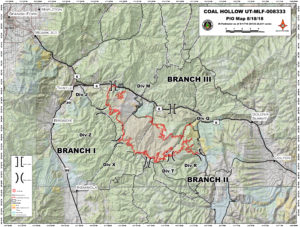