NOTE:  As of 2 a.m., there has been a change to evacuations and closures north of Hwy 6 on the Uinta-Wasatch-Cache National Forests.

Current Situation:  While fire activity was moderate yesterday in most divisions, firefighters stress that there are many miles of uncontained fire, and untested firelines.  A changing weather pattern will likely result in more active burning, beginning around 1 p.m today. Firing operations could be very visible throughout the area, especially along Hwy 6.

In Division M, south of Hwy 6, aerial firing operations were successful in removing fuels from two pockets in the fireline yesterday, an important step in securing the northern edge of the fire.  If firefighters are successful in securing this area and tying it in to line in Division Q on the eastern portion of the fire, it will reduce the amount of firing initially planned and decrease the chances of the fire reaching Hwy 6.  Today, additional firing will occur where needed in these divisions, with additional fire crews assigned to support operations.  Starvation Road, closest to Soldier Summit subdivision, is holding.

In Division R, firefighters improved and secured dozer line from near Bennion Creek Road in the southeast corner of the fire to the west in anticipation of firing operations that will occur today if conditions are favorable. A smoke column could be very visible if these firing operations occur.  The fire remains stalled in aspen stands along the lower edge in Division T, continuing the pattern exhibited over the past week.  Due to inaccessible terrain, fire crews in this area are engaging in areas where they can be successful and focusing on monitoring the slow approach toward Skyline and Garrett’s Ridge roads.  Direct engagement in this area has a low probability of success and a high degree of risk.

In the southwest area of the fire, Divisions X and Z have exhibited minimal growth, allowing construction of dozer and handlines and preparation along Lake Fork Road.  This work continues today.  In the northwest, Division J will continue securing the fire’s edge and improve handlines to further strengthen containment lines.

Weather:  Friday starts a transition into a weather pattern change that will last into next week.  If thunderstorms develop, they will move a little faster than previous days from west to east.  The mountains to the west of the Incident Command Post in Indianola have been a source of development for thunderstorms this week.  Outflow winds could gust up to 40 mph.  A mostly dry cold front will move over the fire late tonight keeping inversions from becoming very strong and turning winds to the northwest for Saturday. 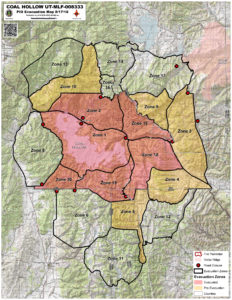 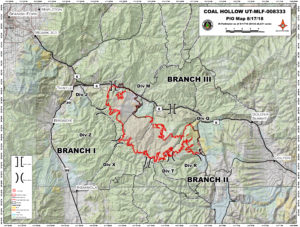