The Goring Fire was reported August 3 and is believed to have started from a lightning storm that passed through Box Elder County. It quickly spread in dry grasses and threatened rangeland, grain crops and ranching infrastructure. Firefighters responded and made a direct attack on the perimeter, but 20 mph winds caused the fire to grow to 1,500 acres within a few hours. Winds and dry weather drove the fire toward Interstate 84, resulting in its closure at about 7 p.m. By late evening, the fire was estimated to be 7,000 acres. Overnight the fire continued burning and fire managers estimate a total of 15,000 acres have burned. 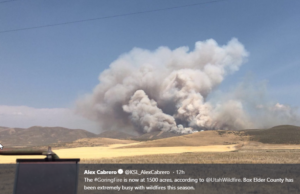 Engine crews from throughout Box Elder County worked through the night to establish containment close to I-84 and by 4:00 a.m. the freeway was re-opened. Box Elder County roads department put dozer line in along the edge of agricultural fields and engine crews then burned along the line saving hundreds of acres of grain fields. The fire is now 20% contained.

Several ranch buildings were threatened, but no structures have been lost. Firefighters will continue to assess the need for structure protection. Firefighter and public safety will be the top priority. Full containment is not expected for several days while hand crews secure the lines and mop up. Heavy smoke along I-84 continues to cause low visibility, so the traveling public is advised to drive with caution. The White’s Valley, Pocatello Valley, and Johnson Canyon roads are closed to the public. 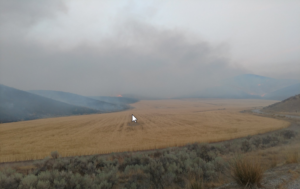 Updates will be posted on Twitter @UtahWildfire and on utahfireinfo.gov