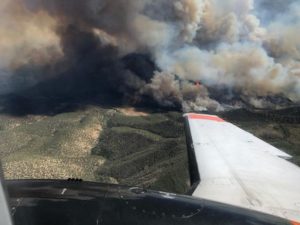 The Dollar Ridge Fire started yesterday at about 1 p.m. on private property in Wasatch County. It quickly grew to nearly 7,000 acres before evening. Fire activity increased in the late morning and by the end of the day, it grew to approximately 30,000 acres to the east and north toward Fruitland and the Pinnacles area.

As the fire advanced, the Duchesne County sheriff’s ordered evacuations for Strawberry Gorge, Camelot Resort, the Currant Creek Subdivision and the Pinyon Ridge Subdivision. Approximately 200-300 homes have been evacuated to Red Cross centers set up at the Fruitland LDS Chapel and Duchesne High School. Evacuated animals are being accepted at the Duchesne County Fairgrounds.

Fire managers sought opportunities to suppress the fire from its outset, but extreme fire behavior driven by high winds in steep terrain and heavy fuels have made it impossible to put crews on the line. Due to high winds, helicopters have been unable to fly and retardant planes were unusable. Tomorrow, more high winds and hot, dry weather is predicted.

By 4:00 in the afternoon, the fire had spread north across Strawberry River and up the ridge toward Currant Creek Subdivision. Although it is unclear how many; structures have been lost in the fire. Due to high fire danger, access for the public to move trailers and other belongings from the evacuated areas will not be permitted until further notice. Numerous road closures are in place including routes into the evacuated areas.