Welcome to the Utah Dispatch Consolidation Update newsletter. The purpose of this document is to provide a monthly update of the dispatch consolidation process to interested stakeholders. The primary target audience is agency personnel however, it is recognized that there are many others interested in how this project develops so the information here can and should be shared widely. It is the intent to provide the most current and accurate information to all stake holders and be open and transparent about the process.
On October 24 and 25 a workshop was held in Salt Lake City at the Great Basin Coordination Center. The purpose of the meeting was to gather input from agency fire officials and dispatch center managers on the establishment of boundaries for a three center dispatch system in Utah. The meeting was well attended with representation from all agencies from all geographic areas in the state. Workgroups made up of a cross section of the larger group worked on developing boundary options that balanced workload and tried to minimize dividing agency administrative boundaries between dispatch centers. Several options were developed. The Oversight Committee studied the options and grouped them by commonality. The three boundary options with the most commonality were selected for further analysis by the Oversight Committee. A preferred boundary option will be forwarded to the Executive Board for a decision. Boundary option maps are included on the following page. 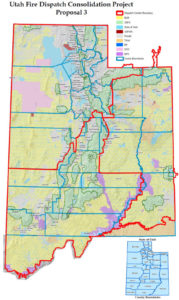 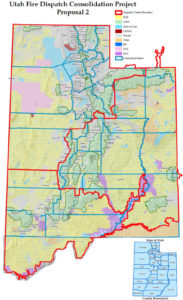 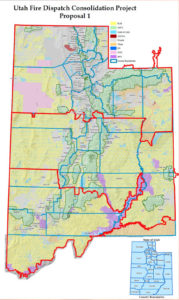 Delivering dispatch consolidation information has been challenging. Inconsistent messaging has resulted in confusion. I do not believe this inconsistency is an indication of differing sentiments among the partner agencies, but rather different interpretations of the same position. The common purpose is and always has been moving toward a three center dispatch structure. This was the decision of the Executive Committee in July 2017. This decision, to move forward, was not a

a call to execute consolidations no matter what. It was a decision to move toward implementation so long as we can assure the safety of our emergency responders and an ability to deliver equivalent service as the current organization. The Interagency Team is prepared to stop, adjust or change this decision at any time if it seems that we cannot propose a model that is safe to our people in the field, results in cost savings, or cannot be supported technologically. Different ways of communicating this message have caused problems. In response to this we have pulled together an interagency group of public affairs officials to update the communications plan and clarify talking points. An interagency press release will be going out very soon. Jason Curry of the Utah Division of Forestry, Fire and State Lands will be the spokesman for the group.
In addition to internal communication issues there has also been an effort to get the correct message to the public. Local representatives from fire departments and members of the general public in some areas have taken a keen interest in this project. Several individuals have contacted their political representatives. In many cases there is misunderstanding about what the consolidation will do and how it will affect them. The
biggest misconception is that suppression resources are being consolidated along with the dispatch system resulting in loss of capacity and increased response time to fires locally. This, of course is not true. A press release will help in correcting misinformation that is fueling much of the public’s concerns.
Price
At the dispatch boundary workshop several comments were made regarding the selection process for the third dispatch center location. Specifically, that Price was over looked and that Carbon County was willing to build the facility. It became clear that the possibility of locating the third dispatch center in Price should be investigated. On November 3, the Dispatch Consolidation Project Manager met with Carbon County Commissioner Hopes, the Carbon County Emergency Manager, and the FFSL Southeast Area FMO in Price to look at potential dispatch center sites. Five sites were reviewed; two existing buildings requiring retrofitting to meet dispatch center requirements and three sites that would require a new building be built. All the sites reviewed would be suitable for a dispatch facility given adequate time and the funding needed for construction. Four of the sites were county owned, one was state property. Each of the county sites would require further negotiation to determine leasing terms and/or transfer of ownership. The county has a similar arrangement with the state for the DNR office building in Price. The county built the facility on county property, the state makes payments similar to a lease to reimburse the county, once the cost of building the facility is reimbursed the property will the transferred to the state. The state owned site is currently occupied by the Department of Transportation (DOT). This site would require negotiations with the DOT and the usual process required by the Utah Building Board for approval. This information was presented to the Executive Board on a November 30th conference call. It was determined that additional information was needed on boundary location and cost before a decision could be made.
Richfield
The Utah Division of Facilities Construction and Management (DFCM) is the agency responsible for construction of all state buildings in Utah. The Dispatch Consolidation Project Manager met with DNR leadership and DFCM in early November to discuss the Richfield dispatch center. Some key points of that meeting were:
A DFCM project manager has been assigned. We are fortunate to have a project manager that has worked with DNR previously on other projects including the DNR office building in Richfield.
There is not an architect on conract for the project yet, however DFCM is hoping to get the same architect that designed the Richfield DNR office building and the NUIFC building. This would obviously be an advantage since we have a history of working successfully together, they understand the purpose and requirements of

a dispatch center, and they designed the Richfield DNR office building to share much of the same infrastructure. They have already produced some preliminary drawings that have served as a starting point for discussions.
The funding appropriated by the legislature for the project should be adequate to build the dispatch center and cache. Savings will be realized by using existing infrastructure associated with the DNR office building.
There should be adequate time to complete the project and move in to the new facility before the lease on the current building expires.
On November 29th a meeting was held in Richfield with the DFCM Project Leader, DNR leadership, and the agency fire representatives. Although we are not ready to begin the construction process, it was a good opportunity for everyone to meet, gain an understanding of the process, and understand the budget constraints. It was also a forum for the agency fire people to express additional needs and possible additions to the preliminary drawings that have been produced.
Many of you know me from my career with the Utah Division of Forestry, Fire and State Lands but let me introduce myself to those that do not. Prior to being selected as the Dispatch Consolidation Project Manager I worked 31 years with the state of Utah. The first half of my career was spent working with the State’s inmate fire crew, the Flame-n-go’s, before moving the state office. I began working at the state office in the position of Assistant State FMO, moved to state FMO in 2006 and finally served as Deputy Director before retiring. I worked on Great Basin incident management teams for several years before being selected as an Incident Commander in 2013. I retired in 2016, moved to Oregon, where I now live with my wife Janet. Dispatch fair share cost sharing was a goal I worked on during my time with the state and sadly never fully achieved. I am excited to work with everyone to develop a safe and efficient dispatch system in Utah that all agencies can support. Contact me with concerns, suggestions and/or questions.
Tracy Dunford
801 558 6508
[email protected]
The Oversight Committee will meet this month to begin to review boundary options and cost data to determine a preferred alternative for the Executive Board.
I will be evaluating the costs benefits of the two potential dispatch center locations.
A FireOrg analysis of each of the boundary options has begun and is scheduled to be completed by mid-January
The Executive Board will be meeting in March. They will be presented with the preferred boundary option developed by the Oversight Committee and cost benefit information. It is anticipated that the Board will select a boundary option and dispatch center location at that time.